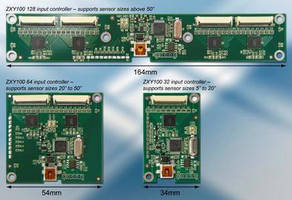 Compatible with PCT(TM) Projected Capacitive Technology-based touch sensors, ZXY100 Controllers are based on 32-bit ARMÂ® microprocessor, which accelerates touch detection and optimizes responsiveness in both direct touch and through-glass sensing. Units incorporate ASIC, which consolidates analog components into single 7 x 7 mm chip. Models include 32-channel version for 5-20 in. sensors, 64-channel version for 20-50 in. sensors, and 128-channel unit for 50+ in. sensors.

In conjunction with the extra processing power of the ARM, Zytronic will be releasing new firmware which will generate one or two simultaneous touch points, enabling customers to develop dual-touch or gesture recognition applications. The new firmware has been developed to be inherently compatible with Windows® 7, allowing customers using this operating system to choose between downloading Zytronic's fully configurable driver (UPDD) or using the basic in-built Microsoft® touchscreen driver (HID). Furthermore, for those customers wishing to write their own application specific touch drivers, Zytronic can release the controller Output Protocol. Other benefits of the new controller will include in-field firmware upgrade capability via on board Flash memory.

In addition to the ARM microprocessor, the new controller will incorporate an ASIC (application specific integrated circuit) which has been custom designed to consolidate a number of key analogue components into a single, small 7 x 7mm chip, enabling a substantial reduction in controller dimensions and if required, facilitating the supply of the controller in chip-set form to allow integration of the PCT touch sensor controller onto a customer motherboard in higher volume and small form/factor applications.

There are three new ZXY100 controllers in the range. The smallest, a 32-channel unit (to be used with 5-20 inch sensors) measures just 54mm x 34mm; a larger 64-channel controller (for 20-50 inch sensors) is also being released, and for the first time, Zytronic are releasing an all new 128-channel device (for ultra large +50 inch sensors) which is expected to be available by Summer 2010. Each will be available with either USB or Serial connectivity.

Zytronic designs and manufactures a range of technologies that optimise the performance of electronic display applications. The company's principle products include award-winning touch sensor technologies, optical filters for enhanced performance and protection, and special filters to minimise electromagnetic emissions. In addition, the company can offer complex shaped glass composites for specialised applications.

Zytronic products are used in electronic displays for information kiosks, web phones, ATMs and gaming machines, as well as by military, computer, telecommunications, medical and lighting OEMs, and are available from its network of worldwide distributors.

The company has its headquarters and state-of-the-art manufacturing facilities in Blaydon, Tyne & Wear in the UK. In addition to ISO-approved manufacturing, these facilities are home to Zytronic's team of lamination, material science and electronics specialists who are responsible for ongoing product development in composite technology.