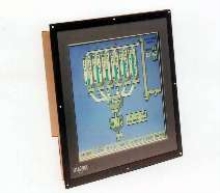 At less than 2.0 in. thick, 17.0 in. SXGA Model M7170 will fit in areas CRTs and other touch screen monitors can not. It is capable of operating from computer's RGB video output port or from video camera or player. Unit is suited for industrial environments that demand rugged operator interface or video monitor.

Clackamas, OR -- February 4, 2005 - StarPanel Technologies introduces today its largest model of industrial touch screen monitor, adding to its full line of products spanning a range from 6.4" to 17" in diagonal screen size.