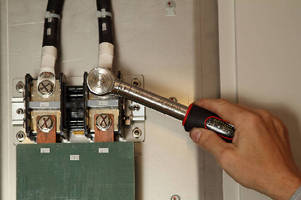 Designed primarily for MRI manufacture and maintenance, TruTorque(TM) 50 N-m Torque Wrench is constructed using non-ferrous materials and provides accuracy of Â±3% of reading, exceeding international standards. Ratchet is reversible and has narrow engagement angle of 5Â° to facilitate positioning of tool in tight confines of vehicles and machines. In addition to medical field, wrench is suited for clean rooms, radar transmission centers, permanent magnet generators, and mine sweepers.


Norbar Torque Tools has launched a new 50 N.m Non-magnetic Torque Wrench to complement its 20 N.m version introduced late last year. Norbar TruTorque(TM) Non-magnetic Torque Wrenches have important applications in the medical field, specifically for MRI manufacture and maintenance, where there is the presence of a strong magnetic field. Using non-magnetic tools on MRI Scanners can avoid serious risk of injury to the operator and damage to sensitive and expensive equipment.

Torque wrenches are used by factory staff, installers and field based personnel working on the cable connections and sub assemblies around the magnet when it is energised. They are also used around the top of the magnet on the refrigeration sub assemblies, valves and seals. In both cases the magnet is at full field.

Norbar's Philip Brodey explains: "These magnets can be 'switched off' by removing the permanent current flowing in the coils but this is costly, time consuming and dangerous. Sometimes this action can trigger a spontaneous quench, instantaneously boiling off 75% of the liquid helium present, which can cost anything up to £10,000 to recover from. Working with non-magnetic tools is essential for anyone working on 'live' systems, especially at the critical and risky 'ramping up' and 'ramping down' process when you bring a magnet to field."

The new Norbar TruTorque(TM) 50 N.m Non-magnetic wrench is acceptable for the majority of MRI scanners in use today and has further applications across a range of industries where tools also have to be used in the presence of a strong magnetic field, such as: