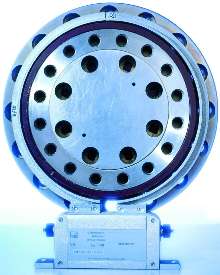 Marlborough, MA - May 10th, 2004 - HBM has launched its T10FM torque flange to meet the demand for increased measuring ranges. The transducer has a combined linearity and hysteresis of 0.1% and is available in three sizes:

The transducer's short axial design allows high lateral forces and excellent radial stiffness. The maximum rotational speed depends on the size and ranges between 3,000 rpm and 6,000 rpm. The T10FM torque flange has no slip rings or bearings and does not require maintenance. Integrated electronics simplify handling for many measurement tasks complementing HBM's T10F series of torque transducers.

The torque flange is powered by 18 to 30 V DC voltage with two outputs available as standard: 10 kHz ± 5 kHz and ± 10 V. The ±10V voltage output can be used directly to process the torque-proportional signals. The 10 kHz ± 5 kHz output allows the T10FM to be integrated into the overall HBM measurement chain via appropriate PME amplifiers or the MGCplus DAQ platform. Measuring amplifiers also can easily be linked to other devices using standardized interfaces including RS232/485, Printerport, IEEE, Ethernet TCP/IP, Interbus S, CANopen and Profibus DP. An optional integrated optical speed measuring system is also available.
Share