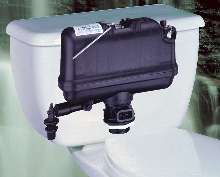 FLUSHMATE IV, with quiet operation, 4.0 liter, pressure-assist operating system, is suited for tank-type toilets and generates almost 3x pressure of gravity units at 70 gpm. Product provides push instead of pull, keeping pressure behind waste and forcing it through trapway in 1 flush. Bowl design contributes to low level of sound during flush. Features include 10 x 10 in. water surface and vigorous flushing action.

The FLUSHMATE IV pressure-assist 4.0-liter operating system for Maximum Performance Fixtures (MPF)TM generates almost three times the pressure of gravity units at 70 gallons per minute. For installation into tanks with advanced design, FLUSHMATE IV provides a "push" instead of a "pull," which keeps pressure behind the waste, forcing it through the trapway in a sigle flush. The specially designed bowls account for the low level of sound during the flush, allowing the FLUSHMATE IV peak noise level to be virtually identical to many low consumption gravity toilets.

Numerous studies identify toilet flushing to be the single largest indoor use of water, with 40 percent or more of total indoor use attributed to the bathroom. One way to counter high water consumption is to install FLUSHMATE-equipped toilets that consistently conserve water in public housing, apartments, hotels, commercial/industrial locations and in private homes.

The innovative FLUSHMATE operating system uses air pressure from the vessel to complete a flush. As the vessel fills with water, the supply line pressure is used to compress the trapped air, which forces the water into the bowl with a specially designed jet at the entrance of the trapway.

FLUSHMATE Operating Systems are manufactured by Sloan FLUSHMATE, producer of pressurized flushing devices. FLUSHMATE is a division of Sloan Valve Company headquartered in Franklin Park, IL. Sloan has been in operation since 1906, and produces plumbing products for commercial, industrial and institutional markets worldwide.