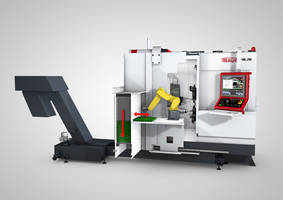 TRAUB, a brand of the INDEX Group, Reichenbach, Germany, has introduced the sliding/fixed headstock automatic lathe TRAUB TNL20 that adds numerous improvements in productivity, precision, and automation to the TNL line. It can be equipped to use up to four tools simultaneously. An optional robot cell integrated in the machine is available for automated loading of blank shafts or preformed workpieces. The machine will be of interest to the connector and medical manufacturing users.

The TNL20 is launched in two versions. One equipment level is the TNL20-9, which has nine linear axes, two turrets (each with 8 stations, max. 12,000 rpm, 2.0 kW), a back working attachment (4 stations), and an autonomous counter spindle. The TNL20-9 can deploy three tools simultaneously, resulting in increased productivity.

The work spindle includes a clearance in the draw tube of 29 mm, allowing the use of a standing reduction tube for bar stock diameters up to 20 mm. This ensures excellent guide quality that supports the precision of the machined part. The guide bushings used in the TNL20 in sliding headstock operation are identical with those of its predecessor machine, the TNL18. The lathe can be converted in just a few minutes from fixed headstock to sliding headstock turning.

With its additional front working attachment, the TNL20-11 has a second upper tool carrier with six stations. Three tool positions are live, one is equipped with a double holder. The front working attachment has an autonomous compound slide in Z and X, as well as an NC swivel axis. By its interpolation with the X-axis, a Y-axis function can be implemented. This way, the user can adjust his tool to the spindle center by a position offset, helpful for deep-hole drilling.

The back working attachment, which can be added both to the TNL20-9 and the TNL20-11, has been completely redesigned and positioned on the lower turret and includes four tool mountings arranged to avoid interference with other tools during machining. It is easily accessible during machining.

In all, the TNL20-11 provides a total 26 tool stations. With the use of double and triple holders in the generously designed turrets, users can easily deploy up to 58 tools. The large tool pool allows the machining of complex workpieces and machining of entire part families without tool changes or major setup effort.

Small parts can be easily and quickly flushed through a tube inserted in the indexing axis of the lower tool carrier onto a conveyor belt on the right of the machine and carried away.

For larger workpieces, an optional two-axis gantry unit moves into the work area with a linear Z-axis and then swings in front of the counter spindle. After the gripper has grabbed the part, the axis retracts. The workpieces are deposited individually.

Long workpieces can be discharged through the counter spindle up to a length of 700 mm.

To assist unattended machining of blank shafts or preformed blanks, a robot cell is integrated into the front of the machine. The robot cell and TNL20 are designed as a unit, and delivered as such.

Consisting of an articulated arm and a vertical pallet storage device with 28 slots, this automation solution allows the user to feed the sliding/fixed headstock automatic lathe with parts that are larger than 20 mm in diameter and can unload and store workpieces produced from bar stock in the pallet storage device.

In addition, the robot cell is prepared for integrating a 3D measuring device and other additional process steps, such as deburring, is possible as well. For machine setup, the user releases a lock and slides the cell to the left, which then allows unrestricted access to the machine.

INDEX Xpanel allows access to the corporate IT network of customers via the control panel of the machine. With Xpanel customer staff has all relevant information for efficient production right at the machine. Xpanel is included as standard in the Traub control and can be individually extended.

The newly designed control panel with 19” multi- touchscreen in the center provides a familiar operating environment. This is ensured by the TX8i interface enhanced by gesture control. Intuitive gestures such as tapping, dragging, moving, swiping, zooming or rotating are possible similar to a smartphone or tablet. The override switches and the handwheel are still available on the machine control panel and arranged ergonomically as usual.

Existing TRAUB machine programs using the same axis kinematics can be transferred to the new control generation. The well-known TRAUB WinFlexIPS programming system is available on the control.

In conjunction with a modified start-up strategy and the latest CFast memory technology, the control starts twice as fast as ever before. Thus, the machine is ready for production in minimal time. A CNC CPU developed by Mitsubishi, used for the first time in the NC section, is tailored specifically to the needs of a CNC machine and ensures an unprecedented block processing speed. To extend this tremendous speed to the drives, the connection of the CNC control to the drive bus was equipped with a high-speed bus in the latest fiber optic technology.