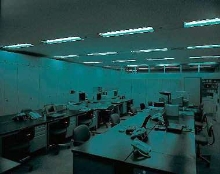 Shatter-proof Glow-Lux(TM) Emergency Afterglow Lighting combines scotopic phosphor blend with non-radioactive after-glow phosphor blend to provide uninterrupted illumination in critical interior areas during low-light and no-power conditions. Even if bulb breaks, glass pieces will continue to glow up to 12 hr after power goes off. This 100% bomb-proof fluorescent lighting can also be detached and used as portable emergency light source.

Leading environmental lighting designer and Academy Award winner develops state-of-the-art, 100% bomb-proof fluorescent emergency lighting that glows for up to 12 hours after the power goes off.

American Environmental Products, Inc. (AEP), in a move to help ensure uninterrupted illumination in critical interior areas such as subways, stairwells, elevators, basements and tunnels, etc., has announced its latest new innovation in serving the emergency lighting needs of an increasingly safety and security-minded public. AEP has developed a bomb-proof bulb that glows in the dark, literally, when the power has been turned off (even if the bulb breaks).

AEP Founder Charles Bolta and lighting designer and Academy Award winner Don Northrop, in response to the 9-11 terrorist attacks, developed shatter-proof Glow-Lux(TM) Emergency Afterglow Lighting. The shatter-proof Glow-Lux(TM) is a new, patented fluorescent light bulb technology. The bulbs remain glowing for up to 12 hours after a loss of power, providing emergency illumination in low-light and no-power conditions. Even if the bulb is broken in the event of an explosion, the glass pieces will continue to emit light, maximizing this emergency light bulb to its greatest potential. Additionally, when charged, the bulb can be removed from the fixture and will continue to glow, and can be used as a portable emergency light source.

"The Glow-Lux(TM) emergency bulb is designed to help increase visual acuity, enhance full-spectrum color correctness, maximize energy efficiency, provide a level of illumination for a period of time even when the power is shut off, and improve emergency response time in which the eye can adapt more quickly to low light conditions," says Bolta.

"Employees and customers can be in many different places in a building when an emergency strikes," says Bolta, who has worked on lighting projects for NASA, MIT, the Pentagon, Bechtel, Disneyland, General Mills, Sears, William McDonough and Partners, and others. "Traditional battery-powered backup lighting systems may not work in these areas, and they can be costly and require frequent maintenance. In the event of an explosion, they can fail. Glow-Lux(TM) bulbs provide 100% bomb-proof protection. You can always count on Glow-Lux(TM) bulbs to emit light, even in the most dire of circumstances."

About American Environmental Products, Inc.
American Environmental Products, Inc. (AEP) is a leading designer, developer and manufacturer of cutting-edge, energy-efficient Daylight full-spectrum, advanced emergency lighting systems and light therapy products. The company was founded in 1995 by President and CEO Charles Bolta, lead inventor of the company's products, and an international lighting expert. Mr. Bolta is a noted speaker and environmental consultant who has worked in the field of lighting and electro-magnetics since 1973. Bolta and his company hold a number of patents and trademarks in the lighting industry. The company's commercial and retail product lines, marketed to a variety of industries, medical institutions and governmental agencies, include Sunwave® and Glow-Lux(TM), both of which provide environmentally friendly lighting products that positively affect the health of people and the planet. For further information visit: www.sunalite.com and glow-lux.com.
Share