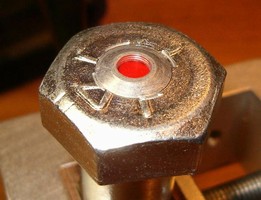 HR (high resolution) SmartBolt has built-in monitoring device that changes from yellow to green and vice-versa to provide at-a-glance visual indication of proper tightening or out of spec performance. Bolt clamp tension changes of 5% or less are discernable by color changing indicator, which has no moving parts and operates entirely by elastic flexure and fluid migration. Bolt is resistant to degradation from severe vibration levels.

Bolts are Bolts, or Are They?