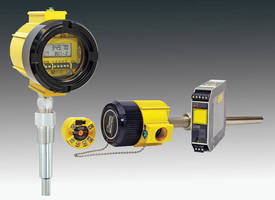 
NORTH HILLS, CA – Moore Industries has released the SIL 3-capable STZ Functional Safety Smart HART Temperature Transmitter family. Part of the FS FUNCTIONAL SAFETY SERIES, the STZ is a dependable and accurate temperature transmitter for use in Safety Instrumented Systems (SIS) where dangerous processes occur. The STZ has been certified by exida after rigorous evaluation to ensure conformance with strict IEC 61508:2010 standards for safety-related applications.

• Sensor drift and corrosion detection that checks and alerts users when the sensor is drifting out of a preset range or when the resistance due to corrosion exceeds set parameters.

• Smart range alarms with four HART alarms – set to any input or calculated input – that detect when the variable is within or outside of user preset limits.

• A High Availability option that enables the selection of how the AO behaves when there is an input failure or out-of-range value detected by the transmitter. This helps prevent spurious trips or nuisance alarms in Safety Instrumented Systems (SIS).

• Input simulation capability allowing manual input of a direct or calculated value. This essentially simulates a real input, allowing users to test the AO or any HART diagnostic and range alarms – which assists in proof test procedures.