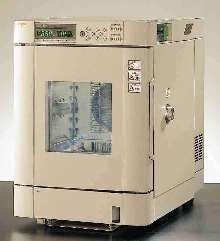 Ten new bench-top temperature and humidity chambers from ESPEC solve a common problem in high-performance environmental testing. In the past, this testing has required large, noisy chambers with special utility connections. ESPEC's new models run on standard power and feature an easy-to-fill water tank, allowing smaller companies and laboratories to perform temperature and humidity testing in a much smaller space.

SH and SU series chambers are extremely energy efficient. They utilize an improved refrigeration system that can reduce energy consumption up to 55% compared to older models. Operation is quiet, with an ambient noise level below 55 dB. The smaller units run on standard 115V power, while the SH and SU -641 and -661 utilize 208V single-phase power.

SH series chambers feature a new cartridge water tank that is removable for easy filling, so no plumbing connection is required. The units can operate for over a week with a single filling of water, and refilling can be done while a test is still in process.

Available options include a large viewing window for sample observation, optional stands for stacking up to three chambers, and a right-opening door. An RS-485 communications port is standard for centralized control and remote operation, but optional RS-232C and GP-IB ports are also available with software.