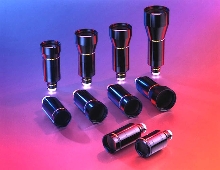 One of the most important benefits of a telecentric lens is that image magnification does not change as object distance varies. A telecentric lens views or displays the entire object from the same perspective angle. Thus three- dimensional features will not exhibit the perspective distortion and image position errors present using a standard camera lens. Objects inside deep holes are visible throughout the field, undistorted, therefore, telecentric lenses are extremely useful for inspecting three-dimensional objects or scenes where image size and shape accuracy is crucial.

Other machine vision products include Invaritar(TM) and Macro Invaritar(TM) telecentric gauging lenses, and cost-effective, custom IVM(TM) (integrated-vision modules) that include lighting, optics and cameras in an ergonomic package optimized for integrators and end-users.
Share