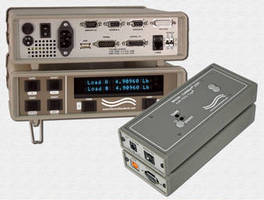 
Electro Standards Laboratories, Cranston, RI, manufactures state-of-the-art CellMite Intelligent Digital Signal Conditioners as well as the Model 4215 Strain Gauge Indicators. These units operate in conjunction with TEDS-Tag load cell systems to match each load cell with its calibration data. TEDS refers to Transducer Electronic Datasheets. TEDS technology can store data inside of a memory chip that can be installed inside of a TEDS-compliant load cell. The TEDS standard specifies a huge number of detailed electronic data templates.

The ESL TEDS-Tag Auto-ID System retains the self-identification feature of the TEDS standard and is simple to implement on any load cell. The TEDS-Tag auto-ID feature with integrated electronic tags allows the Model 4215 and the CellMite to automatically select the correct sensor calibration and analog output for scaling for the connected transducer. Multi-load-cell and multi-instrument matched pair calibrations are also supported, a critical advantage in field calibration services.

In the Downloads section of ESL’s Website, an application note is available on making a TEDS-Tag plug-and-play load cell with an inexpensive chip that fits into a cable hood or into the load cell housing. There are also instructions on how to make an in-line TEDS-Tag ID System. The in-line system is ideal for applications requiring different calibrations on the same load cell. With a single load cell and instrument, the user changes the calibration to be auto-selected by simply changing the in-line cable adapter.  Since each cable adapter has a different tag identification chip, the ESL Model 4215 or the CellMite associates a different calibration data set with each in-line adapter. One example of an application for this technique is the requirement of a precision 6-point linearization of the load cell in two different operating ranges of the same load cell.

The ESL Model 4215 is a calibration-quality unit that has internal nonvolatile storage for the calibration data of 25 load cells. This unit with auto load cell identification is ideal for field calibration service. For embedded applications or for applications that require direct digital communications with a PC, the ESL CellMite can be used.

The CellMite has internal nonvolatile storage for the calibration data of 3 load cells. The CellMite outputs analog voltages as well as direct-to-PC digital readings. The CellMite can be used with GUI software or standalone to replace an analog load cell signal conditioner. When it identifies a TEDS-Tag load cell, it not only auto-installs the corresponding calibration data needed to take measurements from the cell, it also auto-installs gain and offset factors for its 16-bit scalable analog output. The voltage range and offset of the analog output is automatically changed to match the corresponding load cell. Using the CellMite in this way is like having multiple analog load cell signal conditioners all in one, and having them automatically removed, installed, and matched with a load cell, all without any user intervention.