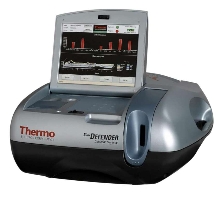 Due to this highly flexible dual technology platform, one of the EGIS Defender's most significant features is its ability to respond to new and emerging threats through future software upgrades, thus ensuring effective maximum protection from explosives attacks well into the future. The EGIS Defender will be used at airports, security checkpoints, nuclear facilities, border crossings and any sensitive security points around the world that require protection from explosives.

The EGIS Defender first applies HSGC to separate compounds of interest with extreme accuracy. Once the explosive samples have been separated the EGIS Defender then employs the unique ion filtering capabilities of microDMx to provide additional positive identification of trace amounts of explosive or narcotic compounds down to a trillionth of a gram.

Unlike existing analytical methods, Sionex's microDMx employs dedicated positive and negative ion detectors running simultaneously, significantly improving the ability to detect peroxide-based explosives such as TATP, as well as providing the ability to detect narcotics within the same analysis. Competing systems either alternate between detecting positive/negative ions or may even be limited to tracking only positive or negative ions, greatly reducing sensitivity and overall effectiveness in detecting the full range of threats.

Not only is the EGIS Defender a leading sensitive explosives trace detection device available today, it also substantially reduces operating costs and has a much simpler maintenance program than competitive products and previous EGIS models.

The EGIS Defender features state of the art communication and wired / wireless networking capabilities that allow technicians to monitor the system from remote locations and, if problems are found, communicate directly with the system for simple repairs. For more complex issues, the lightweight EGIS Defender, reduced in weight by more than 85 percent from the EGIS III model, can be shipped to the maintenance depot for diagnosis and repair with a very short turnaround.
Share