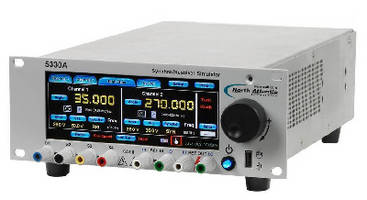 Accepting reference voltages from 2-115 Vrms over frequency range of 47 Hz to 10 KHz, Model 5330A generates output voltages from 1-90 VLL. Two fully independent outputs can be used to simultaneously simulate 2 separate Synchro/Resolver signals or be combined to operate as 2-speed output with support for up to 6 Va total. Intelligent DSP eliminates push buttons and allows programming to be done via integrated touchscreen, front panel USB mouse interface, or increment/setup knob.


BOHEMIA, NY, -- North Atlantic Industries (NAI) announces the availability of a high-accuracy, two channel, programmable Synchro/Resolver Simulator. The 5330A is a full-function instrument which represents a major step forward in digital Synchro/Resolver simulation technology. The use of an intelligent DSP design eliminates push buttons and allows all programming to be done either via an integrated touch-screen, front panel USB mouse interface, or the multipurpose increment/setup knob. In addition, IEEE-488, Ethernet, USB and parallel port interfaces are provided to extend remote operation capabilities. The 5330A features an optional 6VA internal Reference Supply for stand-alone operations.

Improved flexibility is provided by two fully independent outputs that can be used to simultaneously simulate two separate Synchro/Resolver signals or can be combined to operate as two-speed outputs with support up to 6VA total. Each channel can be independently programmed for specific dynamic mode operations including Rotation (continuous or start-stop), Square, Sine and Ramp. The gear ratio for the two-speed mode is programmable from 2:1 to 255:1. The digital angular inputs can be set for one of two measurement modes; 0-360º or ±180°. The 5330A will generate output voltages from 1 - 90 VLL and will accept Reference voltages 2 - 115 VRMS over a broad frequency range (47 Hz to 10 KHz).

"The ability to generate dynamic motion in single or dual speed operation puts the 5330A at the leading edge of Digital-to-Synchro simulation technology," says Lino Massafra, V.P. of Sales and Marketing. "This provides our customers with a state-of-the-art Synchro/Resolver Simulator that is one of the most accurate yet user-friendly simulation instruments available today."

Typical applications for the 5330A include ATE systems used for production testing, simulation systems and automated Synchro/Resolver testing in the Aerospace, Defense, Industrial and Automotive Industries. Pricing for ten pieces starts at $10,900 each. Delivery starts at 16 to 18 weeks ARO. The 5330A is CE compliant.