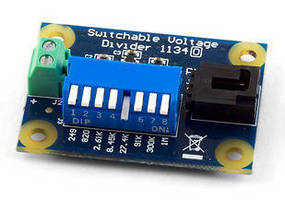 Model 1134 Switchable Voltage Divider has 8 resistors that can be individually switched on or off, allowing multiple switches to be flipped and corresponding resistors to be paralleled. It also provides interface to non-Phidgets variable resistance sensors. With current consumption up to 30 mA and supply voltage of 3.0-5.25 Vdc, unit offers switchable resistance up to 1 million W and variable resistor range up to 50 mW. Users can program sensors using Windows-/Mac-/Linux-supported API.


CALGARY, Alberta - Phidgets Inc. released today the 1134 - Switchable Voltage Divider which comes with 8 resistors that can be individually switched on or off. It is possible to have multiple switches flipped, putting the corresponding resistors in parallel.

"The 1134, while costing a little more than the 1121 - Voltage Divider is far more accurate, less prone to distortion; and can measure a very wide range of resistances. You can even calculate the unknown resistance from the raw value that is returned by the adapter." says Chester Fitchett, CEO of Phidgets.

"We will be carrying a variety of variable resistance sensors, starting with some Force Sensing Resistors to make life simpler for our customers. Every sensor we carry has been qualified and tested and we guarantee that it will work with our Adapter." added Bernard Rousseau, Director of Marketing

Variable Resistor Range: Up to 50 MegaOhms

Resolution between SensorValue 100-900: Less than ±1% of variable resistor per SensorValue

The 1134 - Switchable Voltage Divider is available now. The suggested resale price is $15.00 Canadian.

Phidgets, Inc. is a technology leader in the design and manufacture of low-cost control and sensing modules connected to personal computers through the USB port. Phidgets products are ideally suited for fast prototyping. The privately held company is based in Calgary, Alberta, Canada.