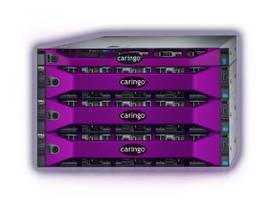 Swarm 9.5 Server allows mount points to be accessed across campus, country or world. Unit is embedded with SwarmNFS 2.0 that enables client to send the data of an object that has changed. Product offers the ability to directly edit object metadata through the user interface and storage transaction metadata filtering for Managed Service Providers. Unit reduces gap between existing file-based applications and object storage.

Caringo Closes the Gap Between File and Object Storage

Released in 2016, Caringo SwarmNFS was the first lightweight file protocol converter to bring the benefits of scale-out object storage - including built-in data protection, high-availability, and powerful metadata - to NFSv4. Unlike cumbersome file gateways and file connectors, SwarmNFS is a stateless Linux® process that integrates directly with Caringo Swarm - allowing mount points to be accessed across campus, across country or across the world. The patent-pending technology delivers a truly global namespace across NFSv4, S3, HDFS, and SCSP/HTTP, delivering data distribution and data management at scale without the high cost and complexity of legacy solutions.

SwarmNFS 2.0 leverages a powerful new patent-pending feature in Swarm 9.5 that allows a client to only send the data of an object that has changed. Swarm then combines the changes with the existing object data, dynamically reducing the bandwidth requirements and the time taken for a client to update existing objects. Before this breakthrough, a client had to re-upload all the data bytes in an object, even if only a small change was required. The ability to only send a few bytes of modified data when updating a large object is both an object storage industry first and a true game changer which dynamically closes the gap between file and object, and has improved overall NFS performance up to 20x for concurrent client access and file operations.

Additional highlights of Swarm 9.5 include:

"We have made significant enhancements to Swarm and SwarmNFS to bridge the gap between existing file-based applications and object storage in response to customer requests and an evolving data landscape that needs a cohesive, scalable, intelligent storage strategy," said Tony Barbagallo, Caringo VP of Product. "These releases deliver on our commitment to develop technology innovations that help our customers manage the unbridled growth of unstructured data and rapidly evolving access requirements."

Caringo will be exhibiting at the JB&A pre-NAB Technology event April 8-9, 2018 as well as in booth number SL11807 of the NAB Show Expo in Las Vegas, NV April 9-12, 2018. They will be demonstrating the new capabilities of Swarm 9.5 and SwarmNFS 2.0 as well as their award-winning FileFly Secondary Storage Platform and Caringo Drive.

Caringo was founded in 2005 to change the economics of storage by designing software from the ground up to solve the issues associated with relentless data growth. Caringo's flagship product, Swarm, decouples data from applications and hardware providing a foundation for continued data access and analysis that continuously evolves while guaranteeing data integrity. Today, Caringo software-defined object storage solutions are used to preserve and provide access to rapidly scaling data sets across many industries by organizations such as NEP, iQ Media, Argonne National Labs, Texas Tech University, Department of Defense, the Brazilian Federal Court System, City of Austin, British Telecom and hundreds more worldwide.