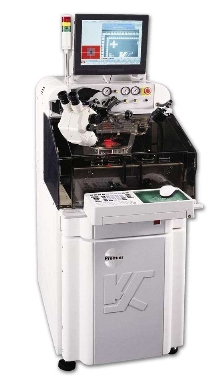 "Many of our global customers have been asking for greater stud bumping speed, lower impact force, and finer pitch capability, in a platform with wafer specific productivity enhancements," states Christian Rheault, K&S Vice President, IC Ball Bonders. "The new ATPremier delivers them all."

Using new hardware and software technology, this next generation, high-speed stud bumper provides greatly reduced cost-of-ownership compared to existing stud bumping products. Offering the fastest bumping speeds in the market along with the smallest footprint, ATPremier maximizes the use of resources and clean room space. Currently, the ATPremier bonds 36 standard bumps/second at 60 µm pitch. This represents an 87% speed improvement over our previous platform the Wafer Pro Plus. As stud bumping does not require under bump metallurgy, bonding can be performed in a single step. Competing technologies use many process steps to bump a wafer.

Customers will see cost savings using the new Wafer-Mapping interface by bonding only known good die. Current practices process the entire wafer, consuming materials and time on chips that are known to be bad from previous testing steps. Developing programs for the machine is shorter than ever with Step-and-Repeat teaching. This keeps the bonder producing product, rather than teaching programs.

The new ATPremier Stud Bumper will be engaged in customer qualifications in April, and will be ready for production shipments by June 2005. For more data on the new K&S Stud Bumper, visit our web site at: www.kns.com/Templates/showpage.asp?TMID=164&FID=277&PID=3298 .