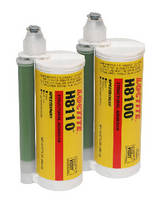 Designed for structural assembly of metals, especially aluminum, LoctiteÂ® H8100 and H8110 Speedbonder(TM) Adhesives are green-colored, 2-component acrylic formulas that cure at room temperature. Loctite H8100 fixtures in 20 min, while Loctite H8110 fixtures in just 5 min. Both feature glass spacer beads that maximize toughness and prevent adhesive from squeezing out of joint during clamping. Available in 50 and 490 ml dual cartridges, adhesives are stronger that spot welds and rivets.


Adhesives Designed to Replace or Reduce Welds, Rivets and Fasteners

Both Loctite® H8100(TM) and Loctite® H8110(TM) Speedbonder(TM) Structural Adhesives are green-colored, two-component acrylic adhesives that cure rapidly at room temperature. Loctite® H8100(TM) fixtures in 20 minutes, while Loctite® H8110(TM) offers ultra-fast fixturing in just five minutes. Both adhesives feature glass spacer beads that maximize toughness and prevent adhesive from squeezing out of the joint during clamping. These products are available in 50 and 490 ml dual cartridges.

Offering a lower total assembly cost when time and labor are factored in, these structural adhesives provide shear strengths similar to overlap welds and are stronger than spot welds and rivets. They can be used in the assembly of agricultural/construction equipment, specialty vehicles, appliances, signage, tubs/spas, building components and other industrial bonding applications.

Henkel operates worldwide with leading brands and technologies in three business areas: Laundry & Home Care, Cosmetics/Toiletries, and Adhesive Technologies. Founded in 1876, Henkel holds globally leading market positions both in the consumer and industrial businesses with well-known brands such as Persil, Schwarzkopf and Loctite. Henkel employs about 48,000 people and reported sales of $20.07 billion and adjusted operating profit of $2.27 billion in fiscal 2010. Henkel's preferred shares are listed in the German stock index DAX and the company ranks among the Fortune Global 500.
Share