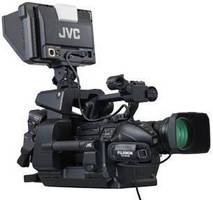 JVC’s new services are compatible with the new GY-HM850 and GY-HM890 ProHD shoulder-mount camcorders, also announced today. The cameras feature a built-in Zixi engine that streams to a 4G LTE, 3G, or Wi-Fi network while recording HD to solid state memory cards. Broadcasters that use these cameras exclusively for ENG are equipped to economically transmit HD video from the field live on the air and live on their Web site.

“Reliable live HD video delivery is now a reality with JVC,” said Edgar Shane, general manager of engineering, JVC Professional Products. “Today’s high-speed and robust 4G LTE connections provide the bandwidth necessary for live HD video streaming, from the field. Through our partnership with Zixi, we can provide a stable workflow that helps broadcasters and Web content producers be first on air and first online.”

The new services rely on JVC’s exclusive dual codec design, which allows the transmission of live HD footage or file transfer in the background while shooters continue to record footage in their normal workflow. When paired with a Verizon 4G LTE modem, which is connected directly to the camera via USB, the camera transmits footage to a broadcast facility in real time.

When used in conjunction with the cloud-based service, video delivery from the cameras to the Internet is available by entering a single IP address. Content can be directed to multiple destinations, including off-the-shelf HD-SDI decoders for live broadcast. Broadcaster’s built-in matrix switching makes it easy to manage signals for distribution, and automatic transcoding allows live, direct-to-Web content delivery to almost any content provider.

With unlimited I/O and a Web control interface for easy operation, Broadcaster is a cost effective way for stations to handle multiple camera coverage at a single event. Each camera feeds into and is identified by the Broadcaster, which can be configured to provide an output signal to the station’s decoder for air. Cameras can then be chosen by station personnel and switched live. The result is affordable live coverage from multiple reporters and shooters without a multi-camera production truck.

Broadcaster also accepts video from Android and iOS devices, and handles transcoding automatically. As a result, a broadcaster can take live video from a reporter who is on site at an accident, for example, but only has a cell phone to provide video of the incident.

Beyond live video transmission, JVC’s cameras provide secure FTP file transfer from the field, plus live monitoring and camera and lens control via Wi-Fi from a smart device (iPhone, iPad, or Android) or from the studio via LTE connection. For broadcasters who use metadata, a built-in GPS allows location information to be recorded. Metadata can also be edited on a smartphone or tablet and transferred to the camera via Wi-Fi.

Available in March, the ProHD Broadcaster will have a suggested list price of $1,995 and requires a subscription to JVC Professional Streaming Services.