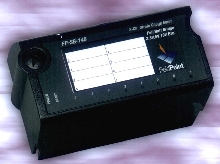 Model FP-SG-140 interfaces to transducers such as load cells and pressure sensors, as well as standard full, half, and quarter bridge strain gauges. It has 16-bit resolution, software configuration utility with pull-down menus, and 8 analog input channels with software-enabled comb filter. Users can set comb filter to reject frequencies above 15, 60, or 240 Hz. Applications include machine and structural monitoring and control.

With 16-bit resolution, the FP-SG-140 is designed for accurate strain measurements in a variety of applications, such as machine and structural monitoring and control. This module interfaces with a wide variety of transducers, such as load cells and pressure sensors, as well as standard full, half, and quarter bridge strain gauges.

The FP-SG-140 gives users programmable bridge completion for full and half-bridge configuration and the option to program each of its eight channels with a different excitation level of 2.5, 5, or 10 V. Each analog input channel has a software-enabled comb filter that users can set to reject frequencies above 15, 60, or 240 Hz. This strain gauge module also uses FieldPoint Explorer, an easy-to-use software configuration utility with simple, pull-down menus to configure the operating mode of each analog input channel.

With the FP-SG-140, users can interface with LabVIEW(TM), Lookout(TM), LabWindows/CVI(TM), or any OLE for process control (OPC) client to quickly create custom measurement applications with shorter set-up time and increased flexibility. This strain gauge module works with all FieldPoint network modules, including the new FieldPoint 2000 Family of intelligent, Ethernet-based network modules that support LabVIEW Real-Time for programming embedded measurement and control applications. The FP- SG-140 also integrates with other types of FieldPoint modules to monitor and control sensors, thermocouples, and relays.
Share