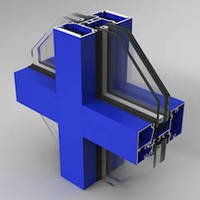 Tubelite’s 34000 Series features a 2-1/2-by-5-inch flush-glazed system and impact-resistant screw-spline framing, glazed with 1-5/16-inch laminated glass positioned in the center of the frame. This new addition is offered as either a non-thermal E34000 Series system or as the T34000 Series with a single poured-and-debridged thermal improvement option. Both choices easily accommodate insulated glass.

Along with hurricane impact resistance and thermal performance, ForceFront medium stile entrance doors are designed for compliance with large and small missile impact, and for forced entry testing to meet AAMA 1304-02. The door stiles have a 4-inch profile width and a depth of 1-3/4-inch. The aluminum used to produce all of Tubelite’s ForceFront systems can be extruded using EcoLuminum™, a high recycled-content aluminum billet composition with eco-friendly, durable finishes.

Tubelite was established in 1945 and is part of Apogee Enterprises, Inc. The company’s headquarters, distribution, warehousing and assembly operations are in Walker, Michigan. Its facility in Reed City, Michigan, houses the company’s aluminum extrusion operation. In 2011, the company expanded with an additional facility in Dallas/Fort Worth, Texas, and offices in Rockhill, South Carolina, to better serve clients working in the southern states.

Tubelite and its staff are members of the American Architectural Manufacturers Association (AAMA), the American Institute of Architects (AIA), the Construction Specifications Institute (CSI), the Glass Association of North America (GANA), and the U.S. Green Building Council (USGBC).
Share