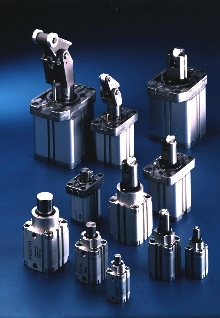 STA Series stops carriers, pallets, or packages containing workpieces. They are available in three models and 16 configurations, including: trunnion rod that stops workpiece carriers weighing up to 330 lb by protruding rod directly into path of carrier; roller style cylinder with piston rod that can stop carrier or allow it to roll at controlled speed; and toggle lever style that can stop load up to 660 lb traveling along conveyor at speeds to 10 in./sec.

The three types of STA cylinders differ in the design of their contact components. The trunnion rod style version is resistant to high forces due to it reinforced piston rod and flange extension. This model is used for intermittent braking of workpiece carriers by protruding the rod directly into the path of the carrier. The larger trunnion model (80mm piston rod) is capable of enduring direct impact loads of as high as 330 pounds, while moving at a speed of approximately 10 inches per second. The smaller unit (20mm piston rod with 15mm stroke) is capable of stopping 24 pounds traveling at 6 inches per second.

The roller style STA cylinder provides an option for a hard stop or intermittent braking, due to the unit's dual-purpose piston rod. The rod is designed to serve as an immovable obstacle (like the trunnion) to the load initially. Then by retracting the piston rod, the roller, with its radius extending above the top of the piston rod, contacts the bottom surface of the workpiece carrier allowing it to roll at a controlled speed as it traverses the process area.

The toggle lever style STA (80mm diameter rod with 40mm stroke) provides a means by which a large load (660 pounds) can be gently stopped as it travels along a conveyor at a speed of up to 10 inches per second. An integral hydraulic shock absorber assembly atop of the STA's piston rod is designed to provide a cushioned stop when it is extended into the path of the workpiece carrier. The shock absorber mechanism decelerates the load and latches in its locked position with the roller contacting the face of the workpiece carrier. Retraction of the rod (to let the carrier pass) mechanically unlatches the shock absorber and drives it into it ready position. Accordingly, the smaller rod units (32mm rod with 20mm stroke) can handle lighter maximum loads, on the order of 90 pounds traveling at 10 inches per second.

Non-contact sensor switches are available for installation within the grooves of the cylinder housing on all STA units. These sensors mount flush with the outer surface of the housing and do not require awkward brackets or other external apparatus.

In addition, flange-mounted STA series "Stopper Cylinders" can be fitted with an onboard solenoid valve for faster response in high cycle rate applications.