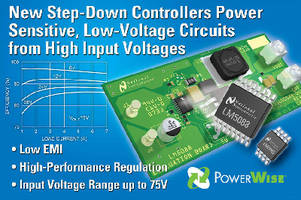 Suited for telecom, networking, and industrial infrastructure applications, Models LM5085, LM25085, LM5088, and LM25088 feature 85% peak efficiency, PWM control, and minimized EMI. Non-synchronous buck controllers can regulate output voltages as low as 1.2 V at load currents in excess of 5 A. Each offers programmable switching frequency up to 1 MHz using single resistor. Models LM5085 and LM5088 operate from input voltages up to 75 V, while LM25085 and LM25088 have max input voltage of 42 V.

The LM5085, LM25085, LM5088 and LM25088 buck controllers feature an input voltage range up to 75V and can regulate output voltages as low as 1.2V at load currents in excess of 5A. Each offers programmable switching frequency up to 1 MHz using a single resistor, enabling the designer to optimize the design based on varying size and efficiency constraints. The LM5085 and LM5088 operate from input voltages up to 75V, and the LM25085 and LM25088 have a maximum input voltage of 42V.

The LM5088 and LM25088 can operate as a slave to an external master supply for applications requiring multiple supply rails that track each other during the start-up and power-down periods. Protection options include programmable cycle-by-cycle current limiting for transient overload conditions and a hiccup mode for reduced power dissipation during continuous load faults.