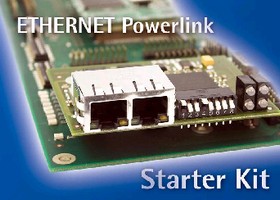 
The fast introduction to the Powerlink world

The new Powerlink Starter Kit from IXXAT contains a Controlled Node, which consists of a basic board with a Phytec microcontroller module and a Powerlink FPGA module, a Managing Node PC card as well as all necessary software packages and drivers for the implementation of a Powerlink system.

Device vendors can integrate the Powerlink module from IXXAT or the hardware design instead of the plug-in module directly in their own circuit. Customers' own applications can thus already be developed before availability of the actual target hardware based on various evaluation modules from Phytec (microcontroller) or Spectrum Digital (TI DSPs) using the Powerlink host API.

In addition, the Powerlink Starter Kit includes a PCI card via which a managing node can be implemented. Based on the Windows driver API provided, own Windows-based applications for data exchange with the Powerlink module and the embedded application can be created.

Further information on the Powerlink Starter Kit is available in the Internet at ixxat.de.

General information about IXXAT Automation GmbH
IXXAT Automation GmbH is a leading supplier of data communication systems for industrial automation and automotive applications. The main technologies in the field of industrial communication systems are solutions based on CAN (CANopen, DeviceNet), Ethernet (ETHERNET Powerlink, EtherNet/IP) as well as TCP/IP with the associated Internet protocols. For automotive applications, IXXAT focuses on solutions based on CAN (diagnosis protocols, SAE J1939), FlexRay and LIN. The product range comprises interface boards, test systems, analysing tools and protocol software.

As of May 2006, IXXAT provides work for 70 employees, predominantly engineers skilled in electronic engineering and computer science and has a certified quality assurance management according to ISO9001.
Our customers are well-known companies all over the world from the industrial and automotive sectors.

IXXAT supports its customers completely in the establishment and application of communication systems based on CAN and TCP/IP, from seminars and consulting, design of system solutions, development and implementation of hardware and software to the supply of a complete product line.