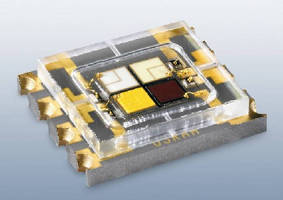 Manufactured using thin-film technology, Ostar Stage LEDs each contain 4 chips in red, green, blue and white. Units have flat glass cover with anti-reflective coating and produce Â±9Â° beam of light. Overall brightness of LED at typical output of 10 W can be up to 700 lumens. This provides max brightness values of 146 lm in red, 234 lm in green, 1.3 W in blue, and 286 lm in white. Measuring 5.9 x 4.8 x 1.23 mm, LEDs are suitable for moveable stage lights, known as moving heads.


Flatter profile with narrower beam and higher luminance are the keys

New OSRAM Ostar Stage LEDs from OSRAM Opto Semiconductors are making spotlights more compact and brighter than ever by means of a much flatter profile, an extremely narrow beam angle, and significantly higher luminance. These LEDs are ideal for moveable stage lights, known as moving heads that provide powerful light beams for rock concerts and other events.

Instead of the usual lens, OSRAM Ostar Stage LEDs have a flat glass cover with an anti-reflective coating, giving the LED a much flatter profile. They are now only 1.23 mm high - one-quarter of the usual height - enabling a much more compact spotlight design. The glass cover on the new LEDs has been optimized for injection of the light into lens systems. Its etendue (the emission angle/area ratio of the emitting light surface to the projected light surface), in conjunction with customer optics, enables a very narrow beam of light (+/- 9°) to be produced. This beam is smaller by a factor of 2 than those of spotlights using plastic-encapsulated LEDs. This optimum bundling of the light also increases the luminance of the spotlight by a factor of 2.

These powerful light sources are based on the successful OSRAM Ostar SMT platform and contain four different chips in red, green, blue and white hence, they can produce virtually any color. All four chips are manufactured using highly efficient thin-film technology so nearly all the light produced internally is emitted at the top surface and more light can be focused into the customer's optics system. In pulse mode, the individual chips can be operated on a current of up to 2 amps (2 A), and up to 1 A in continuous mode.

The overall brightness of an LED at a typical output of 10W can be up to 700 lm. This provides maximum brightness values of 146 lumens (lm) in red, 234 lm in green, 1.3 W (photometric watts) in blue and 286 lm in white. The LEDs have a very small footprint of only 5.9 mm x 4.8 mm. At 3.1 kW, the thermal resistance is very low and heat removal is no problem at all. The LEDs will last for more than 50,000 hours in constant use, giving the moving heads a very long lifetime.

The LEDs can be used in spotlights of any size, from small stage spotlights to large moving head luminaires. "OSRAM Ostar Stage LEDs offer a broad array of different colors and configurations for a wide range of applications - a real treat for lamp designers," explained Volker Mertens, LED Marketing Manager at OSRAM Opto Semiconductors. "And even more color combinations are in the pipeline for the Ostar platform. By mixing the different Ostar types, it is possible to create an enormous range of colors, including pastel shades."

Operating current in pulse mode per color: 1 A

For more technical data on this product, go to www.osram-os.com/pr-ostar-stage