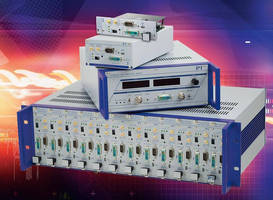 
Auburn, MA, Piezo system specialist PI is switching to a new generation of 24-bit resolution, nanopositioning stage controllers. The new controllers will enable better than 100 picometers command resolution for even the latest generation, long-travel, piezo nanopositioning systems (1 mm and up), such as the PIHera(TM) series closed-loop flexure stages. The use of 24-bit converters represents more than 2 orders of magnitude improvement over the still widely used 16-bit converters.

USB Interface, 1 to 12 Channels, Many Variations

The new controllers feature a high speed USB interface and come in a variety of bench-top, rack-mount and OEM card versions from single-channel units for simple linear actuator applications, to multi-axis system controllers with 12 channels per rack.