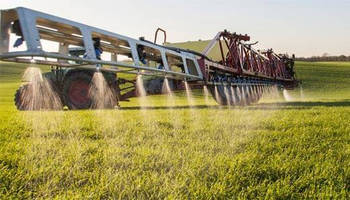 Start of a New Boom Series

Start of a new boom series

The new boom is the start of a brand new series of booms, which fulfils the future farming demands for flexibility in boom widths, high speed performance, narrow transport width and superior robustness.

Performance, speed and quality are the key words when talking boom designs. In the developing process of our next boom generation, we have analysed and focused on optimizing these three areas. The result - HARDI DELTA FORCE. With its unique design, we manage to offer large booms able to drive at high speed while maintaining an optimum performance of the boom. At the same time, the DELTA FORCE is only 255 cm wide in transport. Using high quality Swedish Steel, we manage to optimize weight and strength and thereby produce a boom with a perfect setup, low maintenance and great performance.

Stacking the boom when folding gives the possibility of optimizing the relation between the dimension of the boom elements and the space occupied when it is in transport. When the boom needs less space in transport position, the tank shape can be optimized for a lower centre of gravity; this gives a better driving performance. The high and wide boom elements give extra strength and the transport width is only 255 cm.

The boom centre is the single element with biggest impact on boom performance.

DELTA FORCE is offered with DynamicCenter solution: a very advanced, but yet simple center part is controlling the boom movements while a pendulum suspension reduces boom movements to a minimum and the low center of gravity secures a perfect balance of the boom.

Performance in both flat and hilly terrain

A classic dilemma when choosing concept for the centre, is that the centre working well in hilly condition, has difficulties on flat ground and vice versa. Likewise, optimal performance when spraying is not consistent with the need for turning fast on the headland. The DynamicCenter makes it possible to change the characteristics on the centre part, so the operator can find the best performance for his terrain and driving behaviour.

The yaw-damping system is new for this type of boom. With its unique design of the boom center part equipped with hydraulic damping control of the boom’s yaw movements (forward and backwards movements), HARDI has developed and tested large booms being able to drive at high speed while maintaining an optimum performance of the boom.

DELTA FORCE is 3-folded and will be available with 32, 33 and 36 m working width and can be used reduced folded as well. The partial fold is standard and gives a bigger flexibility for the use of the boom.

Together with the boom a new developed boom fluid system is introduced. The new system is named T22 referring to the diameter of the boom tube. It supports capacity, serviceability and reliability and the customer can chose between Triplet and Pentalet nozzle holder.