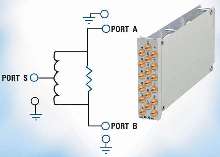 Model SMP6905 incorporates six 2-way 0Â°, 10 MHz-1 GHz power splitters/combiners in high-density, double-wide SMIPII(TM) module. When used as splitter, it delivers 2 outputs of equal amplitude with 0Â° phase relationship between 2 output signals. Module can be used as combiner by applying each signal into output ports and vector sum will appear as single output. Model SMP6905 can be combined with other SMIPII(TM) switch modules to provide building blocks for RF test system.

RF test applications require far more than basic signal routing, and the SMP6905 addresses some of these needs in an extremely compact footprint. When used as a splitter, the SMP6905 delivers two outputs (times six per module) of equal amplitude with 0° phase relationship between the two output signals. Conversely,
the module can be used as a combiner by applying each signal into the output ports, and the vector sum will appear as a single
output. The SMP6905 is a double-wide SMIPII(TM) module, therefore, it can be easily combined with other SMIPII(TM) switch modules to provide the building blocks for a very powerful RF test system.
"This product is ideally suited for applications requiring manipulation of RF signals with known loss and VSWR characteristics, such as vectorial signal addition or subtraction, splitting a single input signal into multiple points, or combining multiple inputs to a single output port," commented Paul Dhillon of VXI Technology.

VXI Technology, Inc. headquartered in Irvine, California, is a global supplier of high-density modular test solutions, based on their award-winning line of modular instruments (VMIP(TM)) and signal switching systems (SMIP(TM)). For more information about these and other products, simply visit www.vxitech.com,
or call 949-955-1894.
Share