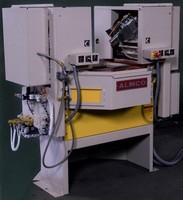 Requiring 15 ftÂ² of floor space, Model S2-30 finishes up to 480 parts per hour with uniformity, consistency, and process repeatability. Parts measuring up to 2Â½ x 3 in. can be loaded on one or both spindles, manually or with robots, and unloaded after typical 15 sec deburring cycle. Mounted on air-actuated collets or ID expanding collets at ends of rotating spindles, complex parts are pivoted into rotating tub with stream of abrasive slurry moving at speeds to 2,000 fpm.

Requiring just 15 square feet of floor space, the new Model S2-30 finishes up to 480 pieces per hour with extreme uniformity and consistency and exact process repeatability. Parts measuring up to 2-l/2 x 3 inches are loaded on one or both of the machine's spindles, either manually or with robots if desired, and unloaded after a typical 15-second deburring cycle.

Spindle finishing, according to ALMCO engineers, offers numerous benefits not possible with conventional finishing equipment. Highest precision of parts is attained, and many can be deburred in no other way because of requirements for extreme accuracy. Process repeatability is assured through elementary adjustments of the equipment and simple procedures performed without special operator skills.

Complex parts are mounted on the S2-30's air-actuated collets or I.D. expanding collets at the ends of the rotating spindles. The spindles then pivot into the rotating tub, placing the workpieces in a stream of abrasive slurry moving at speeds up to 2,000 feet per minute.

Centrifugal force spins the slurry into a form-fitting "grinding wheel" while slow rotation of the part in the mass assures uniform deburring and finishing of all surfaces. The spindle heads automatically return to the up position at the end of the pre-set time cycle.

For newly produced literature and complete information about the S2-30 and other spindle-finishing machines from ALMCO - the sole source for such equipment - contact the company at 507 West Front Street, Albert Lea, MN 56007, phone 1-800-521-2740, or visit its Internet website at www.almcoinc.com. The 65-year-old firm is the world's largest manufacturer and an international marketer of standard and custom-designed equipment for metal parts deburring and finishing, as well as parts cleaning and cost-saving liquid filtration systems.
Share