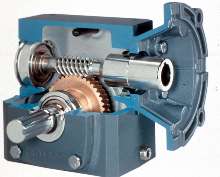 Available as an option on all Series 700 speed reducers, PosiVent(TM) keeps water, washdown solution, and other airborne contaminants out of gearboxes in food processing and material handling applications. In aggressive production environments, PosiVent system replaces traditional vent plugs that can allow contaminants to enter gearbox during cool-down. Built with single seam, system can be mounted in any position without leakage.

QUINCY, Mass., February 13, 2004 - Boston Gear, a member of the Colfax Power Transmission Group, introduces the PosiVent(TM), a unique pressure equalization system designed to keep water, washdown solution and other airborne contaminants out of gearboxes in food processing and material handling applications. With this patent-pending design, gearbox failure associated with contaminants such as bakery dust entering and breaking down lubricants and causing premature failure is prevented, ultimately increasing performance.

The system is now available as an option on all Boston Gear 700 Series speed reducers, including the entirely stainless steel 700 Series product line as well as products with washdown protection such at Bost-Kleen(TM) or Stainless Bost-Kleen(TM) treatment.

In aggressive production environments, the PosiVent system replaces traditional vent plugs that can allow contaminants to enter the gearbox during cool-down. In an independent study, results confirmed that more than one-third of food processors considered water and other contaminants getting into gearboxes a significant problem in their operations.

Distinctive, One-Seam Design
Built with a single seam, the PosiVent system can be mounted in any position without fear of leakage at the user's facility.

"Competitive 'bladders' that perform a similar function contain multiple seams, which significantly increases the risk of leakage and failure," says Ralph Whitley, vice president of engineering, Boston Gear. "This is especially true if the gearbox is mounted in the upside down configuration - a design flaw that has lead to competitive versions being taken off the market. The PosiVent system, which uses only a single seam, greatly decreases the risk for failure and has been aggressively tested from -20 to 220 degrees Fahrenheit and at high pressures with excellent results."

Additional design advantages of the PosiVent system include flexibility and ease-of-use. Whereas competitive models must be installed early in the assembly process, the PosiVent system is installed as a last step, easily fitting into any of the standard pipe plugs. This allows for quick delivery. Every 700 Series speed reducer with PosiVent is "lubed for life" with synthetic lubrication, and is covered by Boston Gear's standard Lifetime Warranty.