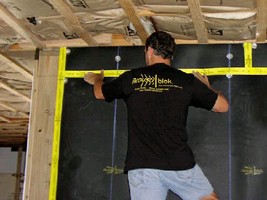 Mounted with Â¼ in. strip of ThemaBlock(TM), 1/8 in. Acoustiblok optimizes thermal insulation when stapled or screwed to stud wall. Product consists of heavy mineral filled viscoelastic polymer that neither stops nor absorbs sound, but actually changes acoustical energy into inaudible friction energy as it vibrates from sound waves. UL approved for over 270 types of construction, material features mold/mildew free rating of 10.


Acoustiblok sound proofing announced that a new formula of their 1/8" material mounted with a ¼" strip of ThermaBlok(TM) produced an amazing 22% increase in R Value (thermal insulation) when added to a stud wall. Independent certified lab tests confirmed the results making tests comparisons of two identical metal stud walls, one with Acoustiblok and one without. The difference was a clear thermal improvement of 22%.

Lahnie Johnson, President & Founder of Acoustiblok stated that "while our soundproofing product continues to receive worldwide attention (even awards in the British House of Commons), many have raised the question of thermal value considering the rising energy costs. These results indicate that after much research and testing, our new product not only addresses Acoustiblok, Inc. International Headquarters phone the increasing problem of noise pollution in our world, but will also be part of the solution to the rising cost of energy."

ThermaBlok(TM) is truly a revolutionary break through. It is a new "nanoparticle technology" which was developed in the aerospace industry and used on the space shuttle. Because of its molecular structure it has the absolute lowest thermal conductivity of any solid material known.

The audio test of the assembly has produced an STC of virtually equivalent to 24" of poured concrete. Acoustiblok material is unique in the soundproofing industry, as it neither stops nor absorbs sound as other noise abatement methods attempt to do, but actually changes the acoustical energy into inaudible friction energy as it vibrates from sound waves, termed Isothermal adiabatic.

The product is easy to install, stapling or screwing the 1/8" thick material to the studs before putting on drywall. Acoustiblok is a heavy mineral filled viscoelastic polymer, UL (Underwriters Laboratories) approved for over 270 types of construction and achieved the highest rating of mold /mildew free, 10.

Unlike many new building products that are viewed as an added expense, Acoustiblok is marketed as an "upgrade" by developers, adding to the long term value and resale attractiveness of the property. In hotels, where noise is the number one complaint (J.D. Power and Associates survey), they have found the public willing to pay an additional charge for a "quite" room. In addition to added privacy and energy savings, it resolves a new expense developers are facing today- noise litigation. Noise and the associated lack of privacy represent the number one complaint and the overall number two in litigations involving multi family units. Many of these lawsuits are turning understandably into major class action suits.

Johnson says that "Developers are starting to realize that sound abatement during construction is not only the cheapest insurance against litigation, but could actually be a new revenue source. Add to this the 22% increase in thermal insulation and we are about as "green" as it comes."

Acoustiblok, made in the USA, is distributed internationally from its headquarters in Tampa Bay, Florida, USA.

Acoustiblok is a member of the Audio Engineering Society (A.E.S.), the National Association of Home Builders (NAHB), and the Custom Electronic Design and Installation Association (CEDIA). For more information about Acoustiblok, visit acoustiblok.com , call (813) 980-1400, or e-mail sales@acoustiblok.com .
Share