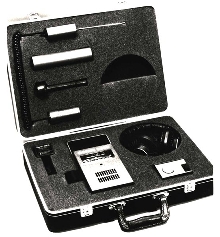 Kernco Instruments Co., Inc. is pleased to introduce its Model 3000 Sonic Leak Detector (rechargeable battery NiCad model) designed to translate ultrasonic signals in the 45 kilohertz range to audible sounds which represent the frequency and amplitude characteristics of the original ultrasonic signal. As a result, audible background noise is ignored and problems which cannot be heard or seen can be quickly identified using the
analog meter in conjunction with the speaker.

The model can be used with an air probe as well as a contact probe. The air probe detects airborne vibrations caused by compressed air leaks in air brakes, tires and escape slides,
as well as in vacuum lines. The air probe will also detect electrical problems such as bad motor brushers, corona discharge, arcing within electrical cables or electrical shorts. The air probes comes with two attachments. One makes it easy to locate leaks in complex systems; the other attachment is used to detect leaks at distances of over 100 feet. The detector kit contains an ultrasonic transmitter which, when used with the air probe, will allow user to detect leaks which are difficult to pressurize, such as main cabin leaks, refrigerated or water-tight compartments and large tanks. The contact probe has been specially designed to detect structure-borne vibrations and can detect mechanical problems such as bad bearings or internal system leaks. It is also used to monitor fluid flow and valve operations.

Specifications are shown below: