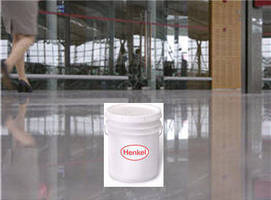 Henkel SF18(TM) and SF26(TM) are solvent-free resins that offer superior hardness, high gloss, and chemical and abrasion resistance properties. Henkel SF18(TM) and SF26(TM) are single-component, ultra-low VOC products that meet the strict requirements for formulating green coatings. Floor coatings formulated with these resins are non-yellowing, have the appearance and durability of solvent-borne coatings, and can be applied with virtually no odor.

For more than 130 years, Henkel has been a leader with brands and technologies that make people's lives easier, better and more beautiful. Henkel operates in three business areas - Home Care, Personal Care, and Adhesive Technologies - and is ranked among the Fortune Global 500 companies. More than 60 percent of Henkel's sales are in consumer goods, while the industrial business accounts for almost 40 percent of the company's total sales. In fiscal 2007, Henkel generated sales of 13,074 million euros and operating profit of 1,344 million euros. Our more than 55,000 employees worldwide are dedicated to fulfilling our corporate claim, "A Brand like a Friend," and ensuring that people in more than 125 countries can trust in brands and technologies from Henkel.