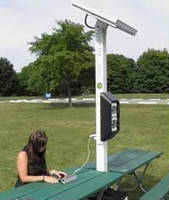 Now people can charge phones, use computers or any other electronic device with 100% solar energy. You can have 110VAC renewable power in any remote area.

"Currently we have installed the Solar Dok at Texas A & M, University of Florida and University of Central Florida" Tony Fata sales account manager at Enerfusion "The response has been great, the students are really enjoying the Solar Dok".

WI-FI Restaurants, schools, parks, recreation areas and trails now can have the benefits of having remote green power without running costly wiring.

- Battery bank for energy storage and usage for uninterrupted power consumption even during the evening hours.