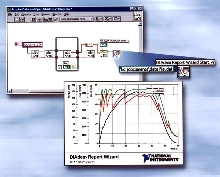 DIAdem v8.1 seamlessly integrates with LabVIEW environment. Engineers can correlate data from different channels, sources, and signals. They can then use interactive tools, such as FFT analysis, for detailed visual examination of data. Engineers can analyze data point-by-point while opening interactive windows that zoom in and out of graphs for varying amounts of detail. DIAdem works with Asian character sets for writing and distributing reports worldwide.

AUSTIN, Texas - Aug. 14, 2002 - Engineers and scientists now can interactively create technical reports even faster than ever before using NI LabVIEW and DIAdem 8.1, the latest version of postacquisition data analysis and report generation software from National Instruments.

DIAdem seamlessly integrates with the NI LabVIEW graphical development environment by shipping with a new virtual instrument that launches DIAdem from the LabVIEW environment. Measurement data becomes immediately available for further processing as DIAdem opens with a wizard showing engineers and scientists how to choose an appropriate layout and quickly generate a report. With DIAdem, engineers can correlate data from
different channels, sources, and signals. They can then use a number of interactive tools, such as FFT analysis, for detailed visual examination of the data. Using cursors, engineers can analyze data point-by-point while opening interactive windows that zoom in and out of graphs for varying amounts of detail. They also can automate standard tasks needed to create frequently used reports and charts using Microsoft Visual Basic Script.

Using a standard desktop or laptop computer with DIAdem, engineers and scientists can interactively work with measurement data and compare test results during each step of the product development cycle. With NI DIAdem as their personal interactive postacquisition analysis and report generation software, engineers and scientists can perform a wide range of tasks - from improving car safety and performance to creating durable household appliances. An affordable, off-the-shelf software package, DIAdem is built specifically for use by engineers, far surpassing traditional spreadsheet software for presenting technical data.

About National Instruments
NI leverages commercial technologies, such as industry-standard computers and the Internet, to deliver customer-defined measurement and automation solutions. Headquartered in Austin, Texas, NI has more than 2,900 employees and direct sales offices in more than 37 countries. NI increases the productivity of engineers and scientists worldwide by delivering easy-to-integrate software and modular hardware. In 2001, the company sold products to more than 24,000 different companies in more than 60 countries around the world. For the past three consecutive years, FORTUNE magazine has named NI one of the 100 best companies to work for in America.

NI(TM), DiAdem(TM), and LabVIEW(TM) are trademarks of National Instruments. Other product and company names listed are trademarks or trade names of their respective companies.