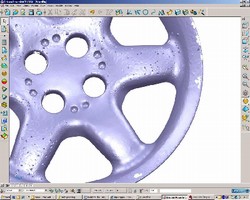 
Delcam will take design software to a new level with the launch later this year of a new version of its CopyCAD reverse engineering package. CopyCAD Pro will be the first product development system to offer "Tribrid Modelling", by adding triangle modelling to the combination of surface and solid modelling that is currently offered in many existing CAD packages as "hybrid modelling". The extended range of functionality is ideal for the re-engineering of existing products into improved or bespoke designs.

"Tribrid Modelling offers a better way of working for all companies developing new variants from existing designs, especially those making products that need to be personalised for a particular customer," claimed Delcam's CAD Product Marketing Manager, Chris Lawrie. "The combination of solid modelling, surface modelling and triangle modelling provides a unique design system for these companies. Having all the different modelling techniques in a single package reduces the need to transfer data between multiple programs and so streamlines the whole product development process."

"Most existing reverse engineering software is limited to capturing data and creating duplicates," claimed Mr. Lawrie. "This means that most companies then have to use a separate CAD system to re-engineer the existing design to produce an improved product or to generate a customised item for an individual consumer. By combining all three modelling techniques in CopyCAD Pro, we can offer a complete re-engineering package in a single program. This allows companies to develop new variants on existing designs in a much more efficient way."

Delcam has developed this unique design approach through the integration of its PowerSHAPE surface and solid modelling functionality with the reverse engineering and triangle modelling options that were in earlier versions of CopyCAD. This means that designers can move data captured with reverse engineering into the design environment more easily and so incorporate additional features into any reverse-engineered design more quickly. However, the new combination is not just a simple bolting together of existing functionality. It incorporates a wide range of enhancements to many of the key operations.

For example, major improvements have been made to the sculpting and model repair tools previously available in CopyCAD to edit triangle files. These tools allow high-quality models to be produced from poor quality reverse engineering data, or from damaged or defective physical components. For example, uneven surfaces can be smoothed out, gaps in the data can be filled and extra points can be added in areas where only sparse data has been collected.

Most importantly, the availability of functionality from PowerSHAPE in CopyCAD Pro has enabled easier, faster and more accurate creation of CAD surfaces from triangle data. The user still retains total control over the way the complete data set is divided into the component features and surfaces. However, each area can now be converted into CAD data by generating a network of curves and then projecting it onto the mesh of triangles. A single surface is generated within the complete set of curves using the Smart Surfacing functionality from PowerSHAPE. This automatically analyses the curves and determines to most appropriate way to create the surface.

Analysis tools are available in Copy CAD Pro to display the differences between the triangle mesh and the resulting surface. This might show, for example, that a closer spacing between the curves would be needed in some areas of the model to keep the surfaces within the required tolerance.

Analysis tools can compare the new surfaces with the scanned data

The other key benefit of the integration into CopyCAD Pro of modelling options from PowerSHAPE is the ability to create "perfect" geometry, in areas where any reverse engineering system would give only approximate results. For example, the design might include one extruded surface, which could only be described by a series of individual surfaces in traditional reverse-engineering software. With the added modelling tools, it is easy in CopyCAD Pro to reproduce the original design intent, by replacing the required area with a single surface. Similarly, a reverse-engineered fillet area can be replaced with a consistent, smooth fillet, rather than existing as a set of complex, free-form patches that may have varying radii.

Tribrid Modelling also allows Boolean operations to be carried out between triangle models and either surfaces or solids. For many years, PowerSHAPE has been one of very few CAD systems able to perform Boolean operations between solids and surfaces. The ability to perform similar addition, subtraction and merge operations with triangles as well will make CopyCAD Pro even more flexible.

There are many examples where a combination of different techniques is needed to create a complete design. A typical example would be in the plastics industry, where initial hand-modelled prototypes are often produced in solid material. Reverse engineering from such models will only produce the external surfaces of the component. However, by using CopyCAD Pro, these surfaces can be offset by the material thickness to generate the internal surfaces. Extra geometric features, such as reinforcing ribs and bosses for fixing, can then be added with the extra solid modelling tools from PowerSHAPE to complete the design. The finished model can then be subtracted from a solid block to give the core and cavity shapes needed to mould the product.

Delcam's introduction of Tribrid Modelling provides the optimum software solution for the mass customisation of designs. Consumers are increasingly moving away from mass-produced products. This can be either because they want designs that are more individual or because they want an element of bespoke design, for example, for medical reasons or for increased comfort. This can only be achieved by incorporating reverse engineering alongside computer-based design methods.

The completed wheel design is generated from triangles, solids and surfaces

Tribrid Modelling in CopyCAD Pro allows users to build up CAD models quickly and easily with data from different sources. It makes it easy to design the main outline of a product with CAD but to use hand models for complex details or decoration, or to capture specific data from a customer or patient. The extra data required can then be collected with a scanning device and combined with the main CAD model in the computer.

A similar approach can be taken when developing "new" parts that are, in fact, variations on existing components that were developed without CAD data. It is often quicker to digitise the existing part and limit the CAD work to the desired modifications, instead of completely recreating the whole part with CAD. This approach is particularly useful for companies, for example those in the ceramics industry, which update historic designs into modern reproductions.