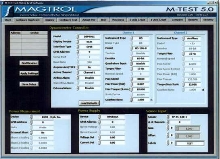 Used in conjunction with Magtrol's motor testing dynamometers and controllers, M-TEST v5.0 tests and calculates up to 22 different parameters to determine performance characteristics of motor. In addition to ramp, curve, and manual testing, program also provides pass/fail testing for production line and inspection applications. Test data can be output graphically, displayed in tabular format, saved as data file, or imported into spreadsheet.

M-TEST 5.0 is a state-of-the-art motor testing program designed for Windows® 2000/XP operating systems for PC-based data acquisition. Used in conjunction with Magtrol's motor testing dynamometers and controllers, this innovative software tests and calculates up to 22 different parameters to help determine performance characteristics of a motor under test. In addition to ramp, curve and manual testing, the program also provides pass/fail testing for production line and inspection applications.

Temperature measurement-previously an add-on feature that had to be purchased separately-is now included in M-TEST 5.0. Up to 32 thermocouples or analog sensors can be read and monitored during a motor test. Heat rise curves on the bearings, windings and housing of a motor can be performed and air flow/exhaust efficiencies can be measured with an air tool or internal combustion engine. M-TEST 5.0, with its complete dynamometer control, even allows for sensor measurement while performing load simulation for duty cycle and life testing.

Perhaps one of the most exciting features of M-TEST 5.0 is the addition of more graphing possibilities. A new Compare function gives users the ability to overlay data from two separate tests on the same graph. M-TEST 5.0's new Cursor tools allow users to obtain the X and Y coordinates of any point on a curve and magnify any section of the graph. The single plot graphical data output option has been enhanced to display up to three separate 1-axis graphs (one for each tested parameter) in the same window.

To round out the new graphing capabilities, users will now be able to change both the X- and Y-axis without having to exit the graph. "This is a feature that will be appreciated among users who use the software on a daily basis," according to Magtrol Sales Representative Barry Myers. Besides outputting data graphically, test results can also be displayed in tabular format, saved as a data file or easily imported into a spreadsheet.

With the new version of M-TEST comes a new graphical user interface. The program is now organized utilizing tabbed pages, allowing for quick navigation between windows.

One of the most user-friendly enhancements to M-TEST 5.0 involves simplified PID scaling. New slider controls set both coarse and fine gain adjustment simultaneously; greatly reducing the amount of time it takes to set PID values before or after a test.

Other new time-saving features occur at startup. Users who repeatedly run only one type of test will be pleased to know that M-TEST 5.0 automatically loads the most recently saved Setup file upon program launch. The software also searches for GPIB devices and displays their addresses, eliminating the need to open a separate program in order to view communication settings.

International users will benefit from M-TEST 5.0's new multiple language support. Switch to/from English, French, German or Spanish at any point during the program. Additional language dictionaries can also be easily created/edited by the user.

Finally, Increased security allows M-TEST 5.0 to run in either a single- or multi-user environment. With password protection enabled, the primary user can assign user access rights and determine who within their departments will have access to specific areas of the program.

Even with everything M-TEST 5.0 has to offer, custom modifications can be made by Magtrol to meet your motor testing needs. To learn more about M-TEST 5.0 and take a quick tour of the program, visit Magtrol's web site at www.magtrol.com/mtest.