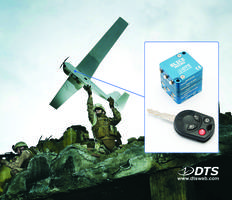 Collecting UAV flight data can be challenging with typical data recorders and sensors that add sizeable mass and volume. DTS ultra-small SLICE MICRO and NANO data recorders are rugged and designed to embed directly in the test article – even small drones.

Modular in design, the NANO has a footprint of just 26x31 mm. The standalone systems include a microprocessor, excitation, full signal conditioning and sample up to 500,000 sps/channel. SLICE can record for hours or even days and direct-writes data to 16 GB flash memory. SLICE delivers precision shock and vibration data in low and high temperatures, high altitudes and low pressure environments (meets MIL-STD-810-E) and is 500 g shock rated with a 5,000 g option available.

About DTS: Since 1990, DTS data recorders and sensors have been used worldwide for automotive crash testing, military blast testing and in crash test dummies. The U.S. Army named a DTS helmet sensor as one of “The Greatest Inventions.” Inc. Magazine has named DTS three times as one of the fastest-growing private companies in the U.S. Headquartered in Seal Beach, California, DTS also has technical centers in Michigan, United Kingdom, France, Japan and Asia-Pacific. www.dtsweb.com.