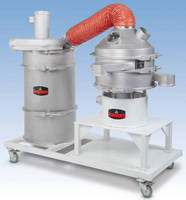 Material fed through a port on the unit's hood cascades over a series of strategically placed internal trays, and ultimately onto a vibrating, fine mesh screen that moves on-size material in controlled flow patterns toward and through a discharge port at the screen's periphery. Heavier fines and a portion of the lighter fines pass through the screen onto a chute leading to a lower discharge spout.

Simultaneously, air drawn into the base of the air-tight chamber flows upward, drawing the balance of low density fines, along with airborne dust, fibers and strands, into an airstream that increases in velocity (as the hood tapers) before venting to a cyclone and/or dust collector.

"The combination of air flow and vibration removes a greater portion of fines and low density materials from on-size particles with higher efficiency than possible with screening alone," says Alamzad.

Optional is a coarse screening deck positioned above the fine mesh screen to scalp oversize particles from on-size material.

The separator is available in 24 to 100 in. (610 to 2540 mm) diameters, in carbon steel or stainless steel, and is offered as a stand-alone unit or a complete system integrated with a dust collection system, exhaust fan and electrical controls on a mobile frame, ready to plug in and run.

The screening assembly is suspended on springs that allow it to vibrate freely while minimizing power consumption and preventing vibration transmission to the floor. Beneath the assembly is an imbalanced-weight, gyratory motor that creates multi-plane inertial vibration for the purpose of controlling the flow path of material on screen surfaces and maximizing the rate at which material passes through the screen.