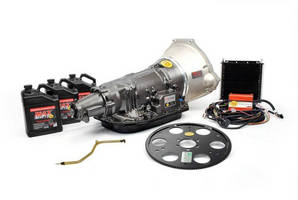 Capable of handling up to 850 horsepower, and with a full manual option when utilizing a paddle shifter or bump shifter, these kits are perfect for Pro Touring, street and race vehicles. These new kits allow you to bolt the innovative TCI® 6x Six-Speed Transmission to Ford Small Block, 6-Bolt or 8-Bolt Small Block, and Big Block motors without using an adapter plate. All kits include a 6x transmission with the appropriate Ford bellhousing, flexplate, transmission control unit with harness, dipstick, fluid and cooler - there is no need to purchase a special flexplate or adapter. Additionally, the flexplates and bellhousings are SFI-approved. TCI® also offers 6x Six-Speed Transmission Packages which include the TCI® Paddle Shifter or Outlaw(TM) Shifter - for a complete turn-key drivetrain solution.

Individual serialized spec sheets containing test scores are included with each transmission. For more information about the new TCI® 6x Six-Speed Automatic Transmission Kits for Ford Engines or any other TCI® product, call us at 1-888-776-9824, or visit us online at www.tciauto.com.
Share