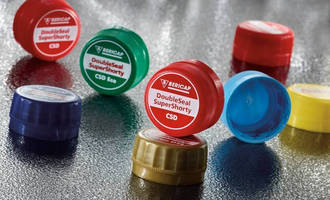 Intended for use on single- and multi-serve plastic bottles, one-piece DoubleSeal(TM) 1881 SuperShortyÂ® closure weighs 6.22 g and features 2-in-1 Outer plus Inner seal that eliminate concerns over CO2 retention and bottle neck distortion. Closures provide lateral, opposing-force pressure from outside and inside to effectively support neck. Made with HDPE (High Density Polyethylene), products can fit into existing operations.