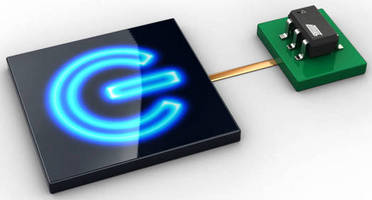 Consuming less than 17 ÂµA, AT42QT101X series is based QTouchÂ® capacitive touch technology for buttons, wheels, and sliders and intended for use in portable devices such as power buttons, hearing devices, and proximity sensors. When key touch is detected, devices will temporarily switch to 12.6 ms fast response mode, allowing additional touches to be detected quickly. ICs automatically calibrate when powered up and stay calibrated even with moisture/contaminant build-up on touch surface.

Based on Atmel's patented QTouch® capacitive touch technology for buttons, wheels and sliders, the new family of single-key capacitive touch controllers offers a better response time. This feature allows mobile touch devices to 'wake-up' faster than products currently on the market today. When a key touch is detected, these devices will temporarily switch to a 12.6 ms fast response mode, allowing additional touches to be detected quickly.

Similar to all Atmel touch technology devices, the AT42QT101X family uses spread spectrum modulation to ensure excellent electromagnetic compatibility (EMC). The integrated circuits (ICs) automatically calibrate when powered up. The device will also stay calibrated, even with moisture build-up or other contaminants on the touch surface. With Atmel's touch controllers, the touch surface remains reliable throughout its lifetime.

The key sensitivity on all devices can be configured for different panel thickness and materials. Electrodes can be made from any conductive material including transparent ITO (Indium Tin Oxide). There are few constraints on the key shape or size, allowing the user a great level of flexibility in the industrial design. The IC can also be configured for use as a proximity sensor, allowing a nearby hand or object to be detected. This functionality is typically used in toys to illuminate "hidden-until-lit" keys when a hand or a finger approaches a consumer appliance.