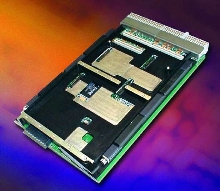 Chatsworth, CA, May 16, 2005 - Aitech Defense Systems, Inc., a world leader in the development and manufacture of board and subsystem level products for harsh environment defense, aerospace and space applications, has introduced a new radiation-tolerant, space-qualified single-slot, 3U CompactPCI (cPCI) single board computer (SBC) that provides an increase in performance of up to 5x and a cost reduction of up to 2x when compared to the point-driven, purposed-based designs currently in use.

The new board combines a high performance, low power PowerPC 750FX processor with a Silicon on Insulator (SOI) processor for reduced power consumption, typically less than 12 W, as well as for increased processor speed and radiation tolerance. Its custom metal frame provides substantial rigidity and shock resistance, as well as an array of stiffeners to support rugged PCI mezzanine cards (PMCs).

The S950 is rad-tolerant with a minimum board-level total ionization dose (TID) of 20 krad (Si). Flight units with higher TID tolerance are available upon request. In addition, the board is latch-up immune with a high linear energy transfer (LET) of 37 MeV*cm²/mg and features a low single event upset (SEU) rate of less than one upset per 25 years in operation at International Space Station (ISS) orbit.

The S950 features a 33 MHz, 32-bit internal PCI bus that supports single and burst transfers, and provides the interconnection to peripheral I/O, enabling fast access between the PCI devices and the host processor. The board's external 33 MHz, 32-bit cPCI bus interface is implemented on a rad-tolerant FPGA for local processor access to cPCI resources. The board can be configured as a single-slot system controller, supporting up to seven additional cPCI boards, or as a standard cPCI board in any other cPCI bus slot.

The S950 comes with an extensive firmware package that includes boot software, an AIMon monitor/debugger tool, an AIDiag diagnostic tool, and BIT, which can be executed either during power-up or after the board has been booted. A COP/JTAG interface provides for debugging and development. The new SBC also comes with a complete board support package (BSP) for WindRiver's VxWorks real-time operating system (RTOS) version 5.5.1 including drivers for users to take full advantage of the board's features. Support for other RTOS systems may be available upon request.