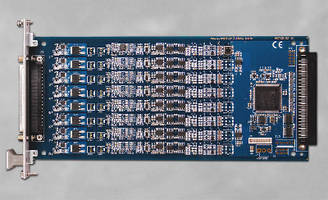 With Model MXSB 074, signals can be transmitted on up to eight 4-20 mA current loops for real-time control of machinery or process equipment as well as automated test of sensors and process equipment. Unit derives each current output from 16-bit DAC on each channel and provides channel-to-channel isolation. MSXB 074 connects to DAP board directly controlled by PC or DAPserver. DAP can send dynamic signals to current outputs on SI module at aggregate update rate as high as 1 M updates/sec.

SI module MSXB 074 derives each current output from a 16-bit DAC on each channel. The module provides channel-to-channel isolation - very important for process control - and uses loop power. The actual range is 0-24 mA, and this extended range lets you use the product to test any of your 4-20 mA circuits: 0 mA simulates an open circuit and 24 mA is 20% over the normal range. Like other SI modules, MSXB 074 connects to a DAP board directly controlled by a PC or by a DAPserver. The DAP can send dynamic signals to the current outputs on the MSXB 074 SI module at an aggregate update rate as high as 1M updates/second.

Each DAPserver - a complete data acquisition and control package - contains up to four DAPs, and each DAP communicates with, configures, and controls many SI modules connected to it. A system consists of any number of networked DAPservers, and includes as many SI modules as your application requires. However many sensors and actuators you have in your system, and however spread out they are, you are covered. And you can include voltage inputs and outputs as well as current loops in the same application. For smaller systems, you may need only a single DAPserver. You can hook it up to any PC with an Ethernet connection. You also can work directly on the DAPserver: add a screen, and connect a keyboard and mouse to the front-panel USB ports.

The new MSXB 074 signal interface module joins a growing family of SI modules related to an established family of intelligent products. All SI modules are intelligent: each includes a field-programmable gate array (FPGA) programmed to communicate with, be configured by, and respond to commands from a DAP. And every DAP is intelligent: each includes an onboard processor running a real-time operating system that communicates with, is configured by, and responds to commands from a PC application. For the application you can use DAPstudio - data acquisition development software from Microstar Laboratories - or a third-party product, like LabVIEW. Or you can write your own. You can run the application on a DAPserver or on any PC on a network. The DAP does not have to be local to the PC that controls it. You communicate with your application on a PC - and the software takes care of the details... right down to what happens on the SI module.

SI modules like MSXB 074 fit into a backplane in a standard industrial enclosure as do other products that conform to the hardware specifications of the Microstar Laboratories channel architecture: signal connectors on 3U (100mm high) Eurocard B (220mm deep) boards - Eurocards - that often pre-process a signal. Signals connect to a DB37 connector or to Wago connectors. A backplane connector on each board connects it to a digital backplane factory-fitted into the industrial enclosure. An interface board that also plugs into the backplane transmits digitized waveforms to or from a DAP board controlled from a PC or DAPserver. Each DAPserver includes a 10-slot Eurocard cage with a preinstalled backplane for SI modules like MSXB 074. Separate industrial enclosures are required only when this 10-slot limit is exceeded.

If your application requires voltage inputs and outputs as well as 4-20 mA current inputs and outputs, you can choose from a range of SI modules for analog input, analog output, analog input and output, and digital input and output. The SI designation is reserved for MSXB products that are intelligent: those that a DAP can communicate with and configure. All new MSXB products are SI modules. The full range of SI modules and earlier MSXB products is described on the company Web site. SI modules all include the level of isolation required to prevent ground loops. Using these boards saves you from having to take other steps against this common nuisance. If spurious currents are corrupting your signals, your application is not doing the job you want it to do.

If you need to monitor or control any number of sensors and actuators using 4-20 mA current loops and you want the convenience of a network-ready Windows solution, check out the new signal interface (SI) modules from Microstar Laboratories. A system based on these modules is designed to scale up to however many current loops need. You can install the modules in an industrial enclosure and connect them to a DAP board you control from a PC, or you can install them directly into a rack-mountable DAPserver that contains one or more DAP boards. You control DAP boards by using DAPstudio - or other Windows software - on any PC or DAPserver on a network. You can download an unrestricted version of DAPstudio to try it out. To try out all its features, you will need a DAP board. The company provides evaluation hardware at no charge. You can order MSXB 074 SI modules for immediate delivery at US$795 each.
Share