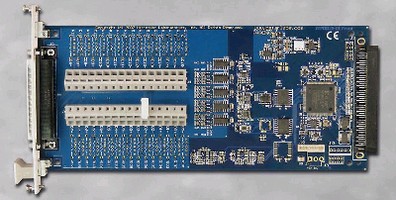 With Model MSXB 084, users can implement signal conditioning in data acquisition systems. Board acquires data at 333 ksamples/sec and includes 16 differential analog inputs, with isolation from PC ground. Analog-to-digital conversion to 16-bit resolution takes place on board itself, minimizing exposure to noise from other circuits in system. Board can fit into backplane in standard industrial enclosure, or into DAPserver to form networked, isolated instrument.


Bellevue, WA, June 3, 2008 - You now can better protect your analog inputs from noise - and eliminate ground loops as well. Microstar Laboratories, Inc., maker of Data Acquisition Processor (DAP) boards and DAPservers, today announced a new board to complement its growing family of isolated analog and digital signal-conditioning expansion boards that make it easy to implement signal conditioning in data acquisition systems. The new board - part number MSXB 084 - includes 16 differential analog inputs, with isolation from PC ground. Analog-to-digital conversion to 16-bit resolution takes place on the board itself, to minimize exposure to noise from other circuits in the system. Each board can acquire data at 333k samples per second. Only digital values are passed to other system components. Eight boards in a 19-inch rack-mountable industrial enclosure can connect to a single DAP board. A PC or DAPserver can control multiple local DAP boards and many more across a network - as a fully synchronized system. MSXB 084 boards share attributes of the new engineering design implemented across the entire signal-conditioning family that the company now produces.
Specifically, the new boards offer high signal density, they enable high channel counts, and they include FPGAs for flexible control.

MSXB 084 boards fit into a backplane in a standard industrial enclosure like other signal-conditioning products that conform to the external hardware specifications of the Microstar Laboratories channel architecture: signal connectors on 3U (100mm high) Eurocard B (220mm deep) boards - Eurocards - that often pre-process a signal. Signals connect to a DB37 male connector or to Wago connectors. A backplane connector on each board connects it to a digital backplane factory-fitted into the industrial enclosure. An interface board that also plugs into the backplane sends digitized waveforms to a DAP board controlled from a PC. MSXB 084 boards also fit directly into a DAPserver to form a networked, isolated instrument. Add MSXB 076 and MSXB
078 boards for isolated analog outputs and isolated digital inputs and outputs.

Every DAP board includes an onboard processor running a real-time operating system that Windows applications that support DLL calls can communicate with
- and control. You can communicate with and control a DAP board from DAPstudio - a Windows application from Microstar Laboratories - as well as from third-party (or your own) software. DAP boards also communicate among themselves independently of Windows to synchronize their clocks with one another. They then all work synchronously as a networked data acquisition system. So, even if your application has hundreds - or maybe thousands - of analog inputs on MSXB 084 boards distributed over a network, all these input channels operate as a single synchronized system. And all are protected from ground currents.

When signal isolation matters, when eliminating ground loops is important, when compact packaging helps, and when your application has - or could have
- many channels, take a look at the synchronized PC-based data acquisition and control systems produced by Microstar Laboratories. New analog input expansion boards announced by the company let you build systems with multiple channels of isolated analog input expansion on MSXB 084 boards in 19-inch rack-mountable industrial enclosures connected to synchronized DAP boards controlled by PC software. And these systems are scalable across a network. The company will supply evaluation hardware and software at no charge. You can download a full version of the latest DAPstudio software to evaluate it. You do not need DAP hardware to try out some of the features of DAPstudio. To try out all of its features, you will need demo hardware. Call Microstar Laboratories for this. The MSXB 084 board starts at US$595 and is available now.
Share