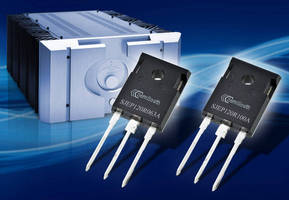 Compatible with standard gate driver ICs, SJEP120R100A and SJEP120R063A are silicon carbide (SiC) JFETS feature respective RDS(on) max of 0.100 ohm and 0.063 ohm. Both products offer positive temperature coefficient that facilitates paralleling as well as fast switching with no tail current at up to 150Â°C max. Both SiC JFETs are available in TO-247 packages, and 100 mohm part also comes in die form for integration into modules.

SJEP120R100A and SJEP120R063A offer a very good linearity and best-in-class distortion. Compatible with standard gate driver ICs, both versions feature a positive temperature coefficient for ease of paralleling; extremely fast switching with no 'tail' current at up to a maximum operating temperature of 150degC and a low RDS(on)max of 0.100W and 0.063W respectively. Devices are available in TO-247 packages; the 100mW part is also available in die form for integration into modules.

Comments Nelson Pass, founder of leading audio amplifier manufacturer Nelson Pass Inc.: "Over the last forty years I have greatly appreciated the qualities of low power JFETs in audio circuits, and experimenting with the few examples of 'unobtainable' power JFETs has convinced me of their great potential. With the new SiC power JFETs from SemiSouth, this potential has been realized in reliable linear power amplifiers. In push-pull topologies, they exhibit a 50% to 70% improvement in distortion, and in single-ended circuits the improvement has been nearly ten-fold. Currently we profitably produce a small high-end audio amplifier using the SJEP120R100A devices and are engaged in developing other higher power amplifiers using this and the SJDP120R085 depletion mode devices.

Comments Dieter Liesabeths, SemiSouth's Director of Sales: "These parts are especially suitable for high end audio amplifier designs which demand the best linearity performance and lowest distortion. Compared to conventional SiC JFET for power applications, the prices for these audio parts has been reduced by about 15% in order to meet the demand of customers"