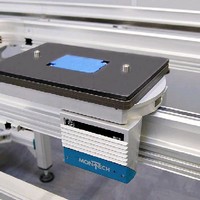 Designed for Montrac transport system, self-moving shuttle with integrated RFID read/write unit runs along maintenance-free monorail track with speeds up to 30 m/min. Product lying on shuttle is provided with transponder that contains information about product's route along track. While on shuttle, transponder is written through Intelligent Routing Module by serial interface. When transponder is outside Montrac system, it can be written using standard RFID unit.


At Automatica 2008 in Munich, Montech introduced a shuttle with RFID technology for the Montrac transport system.

(Huntersville, June 16, 2008) The Swiss company Montech AG has developed a shuttle with RFID technology for the Montrac transport system, which was introduced at Automatica 2008 in Munich last week. The innovation is that the route is defined by the carried product and not by the shuttle, as it has been so far.

Automating and optimizing the material flow

The possibility to integrate RFID technology in the Montrac system delivers benefits to all kinds of users. Alessandro Sibilia, CEO Montech AG: "With the RFID shuttle, customers can further automate and optimize the material flow." In this way, you save time and productivity increases.

In addition, the products can be replaced along the track and they will still reach the "correct" destination, thanks to the RFID marking.

In the transponder, different information can be stored such as item, serial or production number, and working processes. This procedure also ensures an accurate traceability of the production route.

The shuttle with RFID technology is a development that aims at enhancing the intralogistic process management: "I'm thinking of automation and distribution in warehouses," Sibilia says.

With Montrac, Montech has developed a transport system with a modular concept. The self-moving shuttles run along the maintenance-free monorail track with speeds up to 30 m/min. The electrically operated elements (switches and crossings) do not require pneumatic operation (compressed air). "For over ten years now, Montrac has been used globally to enhance production processes, proving that it can revolutionize the logistic and production operations of any company".