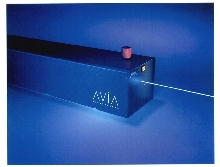 "The short, 266 nm wavelength of the AVIA 266-1500 gives you the highest resolution available from a solid-state laser for micromachining. It can produce spot sizes as small as five-microns-something that other lasers just can't do. It also has the capability of micromachining without producing collateral thermal damage, which is especially important when processing sensitive materials."

Optimized for manufacturing environments, the AVIA 266-1500 features single-shot to 100 kHz operation and a robust industrial package designed for a field-installed lifetime of over 10,000 hours. AVIA is pumped by two of Coherent's field-replaceable, aluminum-free active area (AAA) diode modules, which demonstrate outstanding lifetimes even under the most extreme

"The AVIA 266-1500 expands the capabilities of solid-state, pulsed UV lasers," said Somerville. "It's ideal for demanding industrial applications where excimer lasers are currently being used. Yet it exceeds their performance since it can be focused more precisely and cleanly, and it has a much lower cost of ownership. The performance of this AVIA extends the micromachining capabilities of solid-state, pulsed, UV lasers, while its small size and high reliability make it practical for applications where deep UV couldn't be used before."

Founded in 1966, Coherent, Inc. is a Standard & Poor's SmallCap 600 company and a world leader in providing photonics-based solutions to the commercial, scientific, and telecom markets.
Share