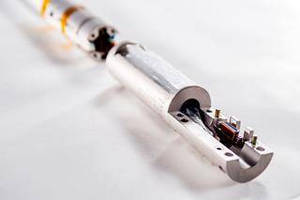 HOUSTON – Directional and horizontal well-drilling techniques have led to the production of vast quantities of hydrocarbons from previously uneconomic, hard-to-reach reservoirs. To help customers reduce operational costs and to increase overall productivity, GE (NYSE: GE) has unveiled the Directive™ system, an enhanced version of a key tool in its Measurement While Drilling (MWD) family of downhole drilling equipment.

“GE has been providing precision directional drilling instruments for many years, including high-quality, reliable downhole systems for directional surveying and navigation. The design and development of the Directive™ sensor package was driven by ever-increasing customer requirements for improved reliability and real-time shock and vibration measurements at high temperature,” said James Junker, global business leader—GE Downhole Technology for GE Oil & Gas. “Such measurements aren’t new to the industry, but the Directive system design features inherent calibration stability for a far longer duration than other commercially available products, leading to a lower cost of ownership for this tool versus competitive products.”

Optimal placement of directional and horizontal wells within a reservoir requires knowing the precise location of the drill bit and the orientation of its tool face at every moment during the drilling process. The drill bit’s location is measured by downhole gravity and magnetic sensors, which are used to perform directional surveys that take into account inclination, azimuth and drill bit tool face orientation. The survey information is then transmitted uphole either through mud pulse telemetry or via electromagnetic waves. GE’s Directive sensor package provides critical real-time measurements designed to enable the drill bit to be oriented in a preferred direction quickly.

The Directive system has a simplified, ruggedized and compact design with fewer components and an improved layout for a long service life at an operating temperature of up to 175°C. Calibration stability of the sensor package under harsh drilling conditions is now engineered for far longer intervals—with the goal of drilling with greater confidence, fewer trips to the shop and lower associated repair costs. The Directive system has greater processing power than the Tensor Directional Module and features a simplified board design, which packs the processor, four channels of detectors, an A/D converter, two MEMS accelerometers and 32 MB of memory (for enhanced diagnostics and lifetime events storage) onto a reduced number of boards.

GE Oil & Gas works on the things that matter in the oil and gas industry. In collaboration with our customers, we push the boundaries of technology to bring energy to the world. From extraction to transportation to end use, we address today's toughest