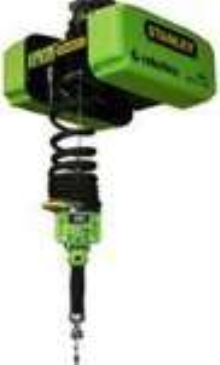 The Cobotics iLift System is operated simply by grasping a slide handle, or the load itself, and gently applying force in the desired direction. The iLift System effectively amplifies operator strength, allowing payloads to be moved with minimal effort. This powerful, new IAD features programmable virtual limits that prevent load movement beyond user-defined vertical boundaries and stop loads precisely with no noticeable delay.

Stanley Cobotics IAD's utilize proprietary control technology that enables operator and IAD to work in tandem-for swift, smooth, precise movements. Cobotics IAD's use patented "intent sensors" to quantify the speed and direction of the motion that the operator requires. Proprietary algorithms then direct the movement of the IAD. This advanced control system enables the IAD to adjust to changes in load mass and operator intent.

The iLift System is designed to maximize the capability of end effectors. The system's programmable hub utilizes internal logic to control end effector functions via air cylinders, interlocks, proximity switches, and a locally mounted E-Stop. The iLift also mounts to most standard trolleys and can be configured in tandem with the Stanley iTrolley(TM) to create multi-axis Intelligent Assist Device (IAD) systems. For added versatility, the iLift can be configured to provide vertical lift for rigid-arm systems.

With vertical operating speeds of up to 137 fpm (0.7 m/s), this powerful IAD offers a continuously variable speed range for maximum control. The iLift System also features an error-proofing function, which automatically compares actual load weight to an expected value. By identifying loads that are either under or over a user-programmable expected weight, operators can easily and reliably identify errors that may have occurred in assembly or packing operations.

Fully self-contained, the iLift System can be equipped with an optional Ethernet connection for communication with plant information systems. The system's fully programmable central hub functions as a miniature PLC, providing programmable I/O for end-effector functions. The system can be configured via PC or PDA.

An optional pendant handle is equipped with low-effort proportional control buttons for precise up/down movement of awkward or hard-to-manipulate loads. An optional remote slide handle is available for end-effector integration.